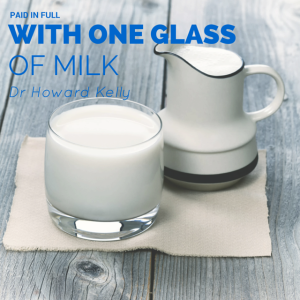 “Whatever you did for the least of these, you did for me” – Matthew 25:40 A GLASS OF MILK – PAID IN FULLOne day, a poor boy who was selling goods from door to door to pay his way through school, found he had only one thin dime left, and he was hungry. He decided he would ask for a meal at the next house. However, he lost his nerve when a lovely young woman opened the door. Instead of a meal he asked for a drink of water. She thought he looked hungry so brought him a large glass of milk. He drank it slowly, and then asked, “How much do I owe you?” “You don’t owe me anything,” she replied. “Mother has taught us never to accept pay for a kindness.” He said, “Then I thank you from my heart.”As Howard Kelly left that house, he not only felt stronger physically, but his faith in God and man was strong also. He had been ready to give up and quit. Year’s later that young woman became critically ill. The local doctors were baffled. They finally sent her to the big city, where they called in specialists to study her rare disease. Dr. Howard Kelly was called in for the consultation. When he heard the name of the town she came from, a strange light filled his eyes. Immediately he rose and went down the hall of the hospital to her room. Dressed in his doctor’s gown he went in to see her. He recognized her at once. He went back to the consultation room determined to do his best to save her life.

From that day he gave special attention to the case. After a long struggle, the battle was won. Dr. Kelly requested the business office to pass the final bill to him for approval. He looked at it, then wrote something on the edge and the bill was sent to her room. She feared to open it, for she was sure it would take the rest of her life to pay for it all. Finally she looked, and something caught her attention on the side of the bill.

She began to read the following words: “Paid in full with one glass of milk” Signed, Dr. Howard Kelly. AUTHOR UNKNOWN

Want to stay in the loop?

Sign up here to receive updates straight to your email!

Anxiety Panic Attacks It's a vicious cycle of intense feelings, often there is no obvious reason for a panic attack, the fact that any of them can come out of the blue creates this self-fulfilling prophecy that if it happened then, it will happen again. We usually spend our time and effort trying to avoid those uncomfortable feelings, on edge that they can come back at a moments notice, which is confirmed when eventually it does happen again, and on we go. Sometimes doing relaxation techniques can increase these experiences. This is frustrating and confusing - if we can't use those, then what can we do? The trick I have found in my experience with working with people who have been tormented by anxiety attacks is to change the way we respond to them - not to avoid them from happening in the first place. You see, when we focus on not doing something, we end up doing it. With anxiety, the fight/flight response is triggered, which actually bypasses the thinking brain - which is the reason it is hard to rationalise anything when you are in the panic attack. Though, when we are on the other end of the attack, the thinking brain kicks back into gear trying to understand what the heck just happened! You may find that you have thoughts that suggest you are being stupid for feeling anxious about nothing. Though what you really need to hear from yourself is "you are safe, there isn't any danger, your body just misread the situation" So instead of doing your level best to avoid a panic attack, allow it to come, ride the waves, then respond kindly to yourself, reassure yourself that you're not in any danger, your body is just doing too good of a job to protect you - and keep on with your day. Eventually, your body will start to recognise real danger signs from the perceived ones, only kicking in when you actually need it, and you will find that the intensity isn't as severe so you aren't so paralysed. Finally, you can start to enjoy life again! #counselling #counsellingservices #findaqualifiedtherapist #selflove #selfcare #anxiety #anxietyrelief #panicattack #pacfa #ccaa #aca
Share in the comments section or email wellnesscounselling@live.com.au #help #resources #christmas #free #support #guides
Sometimes all we need for self care is the scent of a refreshing candle to waft through the home and lift the spirit. The little things add up, make sure your bank is being filled with little self care things, not depleted by little energy drainers. #selfcare #itsthelittlethings #tobusynottorest #bodyisatemple #mindmatters
Day 3 - Self-care It's important to care for yourself holistically; keeping an eye on your bio-psycho-social-spiritual areas of life is really important. Lately, due to a certain very cute baby who has no concept of time, I have struggled with mornings. This has affected my ability to attend Church and Bible Study, which I have really been missing. Though today, I managed to drag myself and Bub out the door and soak myself in spiritual self-care. What area of your life is most in need of a spring clean overhaul? #npd17 #nationalpsychotherapyday #selfcare #selfcaresunday #holistic #therapyworks #psychotherapy #counselling @jodie.gale

Want to stay in the loop?